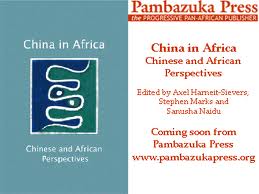 “Sino-African Relations: Reflections on Civil Society Engagement” by Antony Otieno Ong’ayo in Chinese and African Perspectives on China in Africa (2010)

I agree with Ong’ayo’s point about what the role of academics should be in discussing China and African relations: “Academia’s role would therefore be to underpin the understanding of the socio-political and economic problems facing both Africa and China and combined with civil society’s input would provide a formidable challenge to the hegemony of global capital and the political elites overseeing its operations” (239). Civil society can be a conduit for democracy and leverage against state forces; whoever, as the author demonstrates,there are also ways in which civil society has been linked with a neoliberal agenda.

In One Zambia, Many Histories, Mulenga contends that trade unions have been weakened from 1964 to 1991 due to economic liberalization policies that targeted 280 parastatals for privatization. The impact of structural adjustment programs (SAPs) on the labor market has been “devastating”. Factors that have been attributed to the decline of unions elsewhere (in various Asian countries) include the small size of organized industrial labor force, relatively low education of the labor force and legislation that counters single bargaining agents inside firms. The Zambian Congress of Trade Union (ZCTU) founded in 1965, which was led by former president Fredrick Chiluba, was weakened due to government suppression. When the organization resisted the government, Kaunda’s response was to shift from support to repression; in 1982, Chiluba and 16 other trade union members were imprisoned. After Chiluba came to power, a similar pattern ensued, with the further weakening of unions as a result of government suppression.

As the article points out, the weakening of civil society, particularly trade unions, can be attributed to government’s role in restricting them and also coopting strong labor leaders into the government system. There were 250,000 total union membership in 2001. After SAPs, which caused great harm to civil society, membership dwindled to half. Efforts at union organizing has also been frustrated through the increasing casualization of labor. However, Miles Larmer notes the revival of labor movements and argues that there is great potential for future mass mobilization. Despite varying degrees of strength of civil society elements, they are significant in fostering more equitable and therefore, less neoliberal relations between the Chinese and their African partners.

Ong’ayo maintains that a dialogue on China-African relations must include civil society on both the Chinese and African side. This includes knowledge of working conditions and exploitation in export processing zones (EPZs), human rights violations in work environments and threats to human security on China. Due to this lack of knowledge, the author argues, African civil society organizations and academics might overlook ways in which civil society might intervene as “an autonomous counterbalance to the state” (234). Possible interventions may take on the form of transnational alliances and activist coalitions around the world. Collaboration is imperative to prevent the state from dominating policy processes (239). Scholars should conduct research on the impact of Chinese investments, including “labor and human rights issues, on the impact of Sino-African agreements on African governments’ ability to deliver development and on the broader socio-economic and environmental impacts of Chinese investment in Africa” (240).

Another solution Ong’ayo posits, which I find exciting, is the possibility of building a database of current policy in China and individual African countries to document current and encourage future in-depth analysis. This would require collaboration among scholars around the world working on this topic and joint efforts with their civil society counterparts.