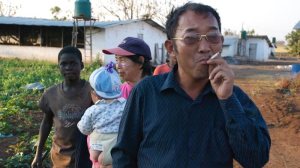 So I went to the film screening for “When China Met Africa” and “The Colony” sponsored by the Committee on Global Thought at Columbia University and was glad to witness such thought-provoking documentaries related to my research topic. The first film had more of an argument to make, not quite as cynical as Darwin’s Nightmare, but it had a slant which I quite well embrace. The second film was more of a narrated, journalistic account of Chinese lives in Senegal. I was partial to the first film, primarily because it tried to illuminate some of the controversial and taboo topics in China and Zambian relations through powerful yet subtle images and dialogue. Some of the topics that the film addressed — topics that I’m grappling with in my own research — are the following:

1) Potential Exploitation of Workers and Unequal Power Dynamics — Many of the scenes made me feel uncomfortable, as they showed the Chinese in the negative light, in particular, yelling at the workers, talking about “bashing in the head” of a local who might have stolen chickens from the owners, and giving them low wages in harsh working conditions. My research in Zambia also confirms this troubling aspect, although as the film only briefly alludes to, but I try to discuss a bit more thoroughly in my work, the language barrier poses a huge problem. Many of my Chinese friends spoke of their insecurities in speaking and understanding fluent English, and this created distance between them and locals. Their reliance on mannerisms and gruff tones tended to be easily misconstrued as blatant rudeness or even exploitative styles of management. I think that some of my Chinese respondents, in order to overcompensate for their insecurities, exhibited rougher styles of management because of their insecurities of trying to make it in a foreign country and also about their English abilities. Nonetheless, I do think there are issues of race and also global world order perceptions that the film elided. Some of the Chinese in the film made negative comments about dark-skinned, Black people. In preliminary fieldwork, nearly all of my respondents espoused some form of racial prejudice. I will tentatively put forth that this has to do with how Africa is positioned in the imagination of Westerners and the Chinese (many of whom are influenced by the West as well). That is, their perceptions of race also has to do their perceptions of China as a rising global power and Africa as far behind, economically and also in terms of development. Thus, most of my Chinese friends wanted to make enough money either to go back home or to go to countries they considered to be in the “first world.” Anywhere but Africa, they said. Still, race, in terms of preferences for lighter skin in the Chinese context and brought over as social practice in African countries, cannot be completely ignored either. These are issues that the film touches on and I hope to address in further research.

2) Food Chain — I became quite cynical and even depressed at some of the conditions I witnessed while in Zambia during the past three summers. The film did a great job in provoking the audience to be critical about the benefits that locals accrue from Chinese foreign investments. I found the juxtaposition of images of dignarities and elites on Chinese and Zambian sides meeting with elaborate fanfare against images of locals struggling to make ends meet and working in tough conditions to make a living especially effective. One got the sense that what is happening among state and international actors was not benefiting people on the ground, the Chinese and Zambians who were learning to work with each other and working in the hot sun to complete projects signed and sealed by the elites. I always think of the food chain analysis when I think about my research (I’m quite pessimistic, I know, and it’s been hard not to be). Some of the Chinese I met, as in the film, were in Zambia to take advantage of opportunities that they were excluded from in China. Too much pressure in China. Some felt left behind. What happens then? They go to Zambia, where so many are also left behind. At least where I stayed in Lusaka, unemployment reaches over 70 percent. Individual Chinese traders must struggle at first to make some profit, but they do come with the advantage of more capital garnered from back home. What does this do to local Zambians? Some are driven out of business. Others work for the Chinese for very low wages because they don’t have many other options. One man complained to me that the government was not preventing the Chinese from entering nshima-making niches at the market and was adamant that this should be a local-targeted niche. Even there, he said, the Chinese were taking over. The movie pointed out that there are these structures in place that put both groups at a disadvantage and it became a matter of one group crawling over the other to get ahead within structures that are inherently unequal. It reminds me of the food chain. It’s not right for the toad to eat the fly, but the toad eats the fly to survive — survive until, at least, when the animal above the toad eats the toad. What the movie didn’t address was the level of corruption among the elites and political/international actors. I wondered, for example, how much the Zambian minister was getting from the Chinese to give the companies bids on construction and other development projects. I am sure there was an exchange of money, but how much and when?

What the movie did make clear is that even as the individuals try to learn to understand each other and their own lives, there are challenges that extend beyond their day-to-day situations. These challenges are global and economic and attest to the notion that China and African relations is less a clear-cut domain, but seemingly more and more about structural inequalities in the global world order.